Hot off the heels of the Spark release of this model of the Racing Point RP19, the Minichamps version has also landed.


The first thing that I noticed about the model is how much more vibrant the colours are compared to the Spark model. In terms of the shape of the model, there's very little to choose between the two model makers.

The other very minor difference is the placement of transition of colours from the inside to the outside of the rear wing endplates, and I do prefer the Minichamps attention to detail there. Having said that, there is more detail on the floor on the Spark model.

With not much to choose between the two, the score for both models is the same.
Score: 8/10

Minichamps have released a US GP version of the same model, commemorating when Lewis drove into a painted spot at the end of the GP reserved for the 2019 World Champion. This means the car is facing the other way in the box.

Having bought both models, I thought it would be a good opportunity to compare both cars in a bit more detail, both cars being diecast. 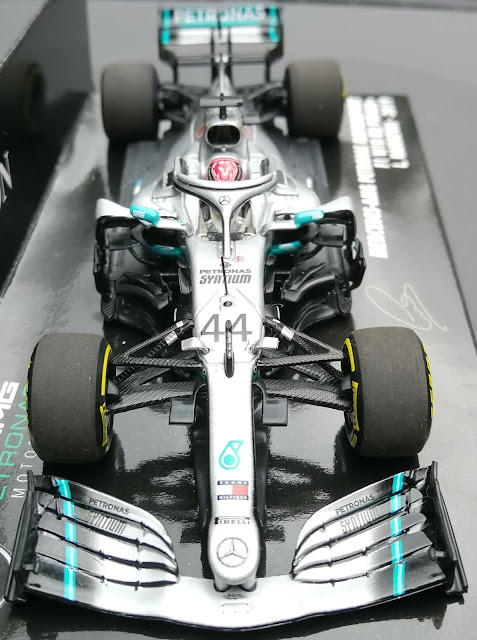 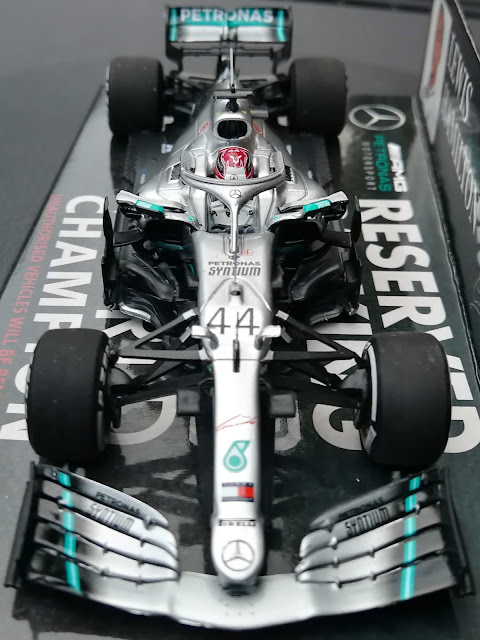 From the front of the car, there's not really any noticeable change, other than the front wing endplates which you can't quite tell from this angle. There is a change to the winglets in around the bargeboard area, but we'll consider that later. 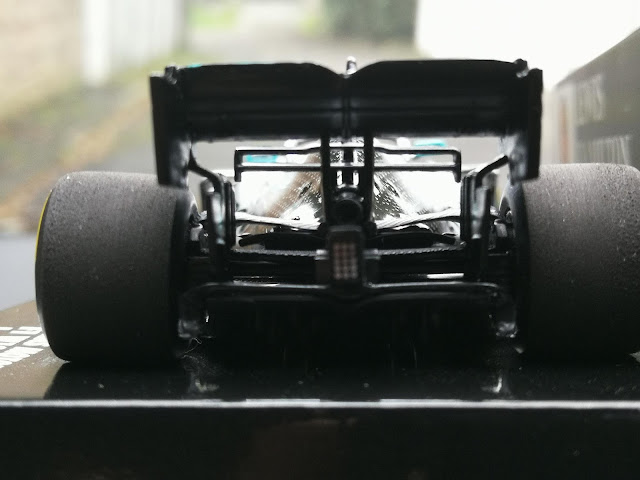 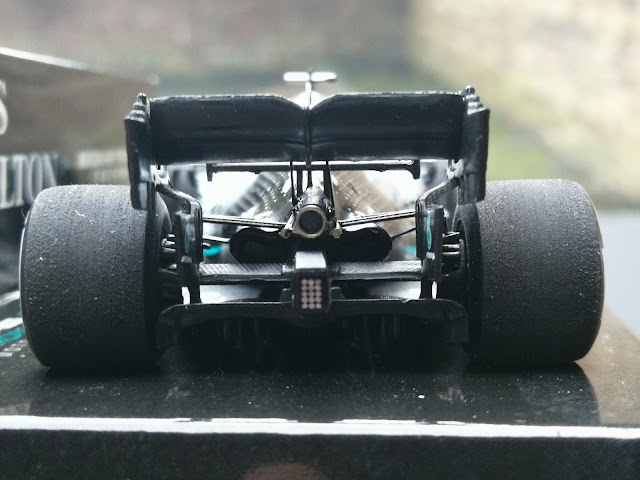 Moving to the back of the car, and I know it's been three years now, but I still love the wider rear tyres. Mercedes have very high rear suspension mounts as they do on the front, with the driveshaft covered in a wing shaped cover reminiscent of the Williams FW16. It's great to see even at this scale, the detail that goes into the rear brake ducts and all the tiny wings they squeeze in there. In terms of the two models, I can't really find any differences to spot. 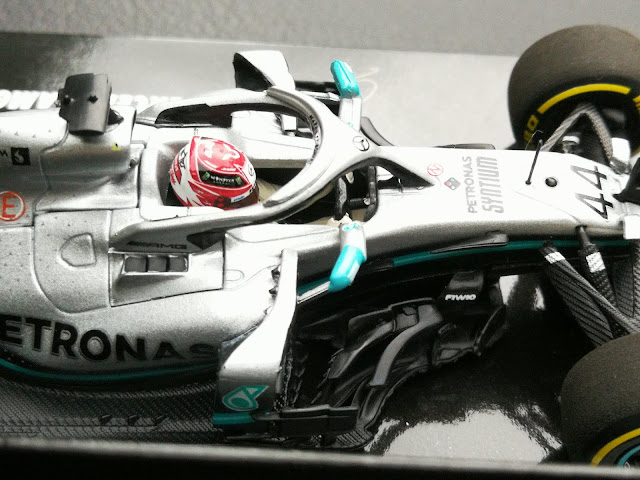 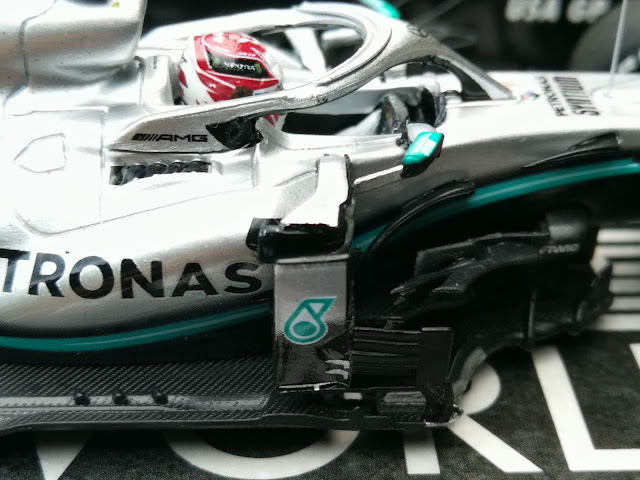 Another area of highly intricate details is the bargeboard region in front of the sidepods. Reduced in size that they're able to develop, hasn't stopped the complexity, with teams managing to get their boomerang wings in. The main difference is on top of the sidepod, with the winglet not connected to the vertical outboard vane, although all the vertical vanes have changed slightly. The new version cleverly incorporates the mirrors, which are vented, hence the increased black region. It's still great to see the winglet on the halo get such good definition, and the different number of gills on the side of the cockpit which is race specific. 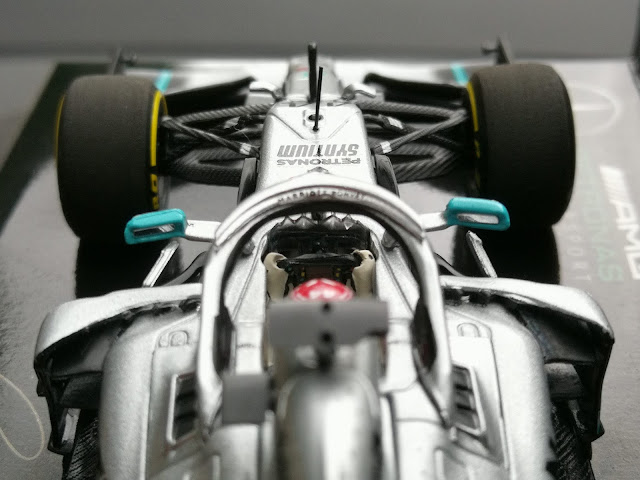 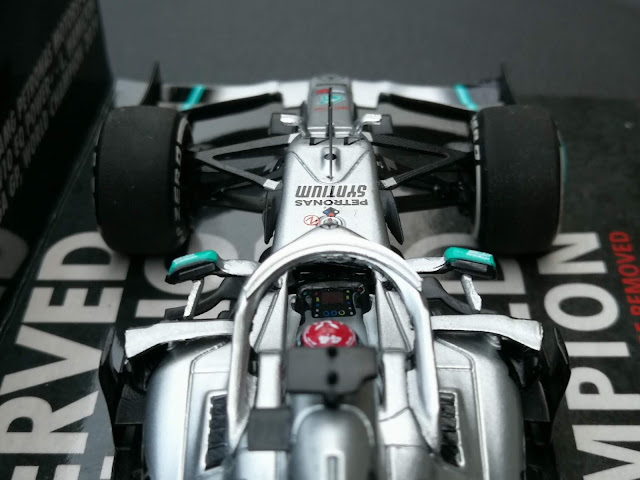 The final comparison is from a kind of T-Cam position. I like how the model has the saw-tooth shaped visors in front of the cockpit, and the models feature an accurate steering wheel shape with nice stickers on. As noted above, the US GP car makes an attempt at the vented mirrors.
No comments:

After all the issues with lack of money in 2018 when the team were still Force India, it was clear that the 2019 challenger would not be doing its usual punching above their weight. But the team steadily improved as the season went on, and after the summer break Perez finished in the points at all bar the Singapore GP where his car retired with an oil leak, with many of them from lowly starting positions.

Stroll struggled all season to get out of Q1, but had a few highlights, such as finishing in the points in Canada. His best finish was at the chaotic German GP, where he was so far behind, he was able to pit at the right time and propel himself to the front of the grid and in with a shot at the podium. In the end, he finished a credible fourth.

The team did well to secure a seventh placed finish in the Constructors' Championship, not far behind Toro Rosso and Renault, but comfortably ahead of Alfa Romeo. Considering their issues at the end of last year, that's a positive improvement, and I suspect they will be looking to be in the mix at the front of the midfield in 2020.

Spark released their version of the Racing Point based on the Chinese GP. The car has a lot more blue in deference to SportPesa, and the livery just looks a bit too messy for me. I'm really not keen on the darker pink on the inside of the rear wing endplates.


Anyway, back on track and onto the model itself and it's a solid model again from Spark. Proportionally everything looks good, the detail looks strong as always, and from the side, it looks fantastic to me.

Force India/Racing Point have run a unique nose for a number of years now, and the continue to have those two slotted channels nicely integrated into their front wing supports. There's nice detail on the livery on the front wing. The bargeboards have a number of slots along the top, nicely modelled here and the winglet arrangements at the front of the sidepods is also accurate and nicely modelled.

After testing, they introduced large slots on along the edge of the floor and you can just about see that on the model from this angle. If i was really nitpicky I think they left a bit too much pink along the top of the engine cover, and the blue on the rear wing endplates to wrap around the side a little more.

Again, if I was being picky, the airbox needs a little more carbon colour around the front, if you see it from the front, there's only a very tiny circle of pink visible.

All in all, I'm pretty impressed with this offering from Spark. I think if perhaps Minichamps did this model (I've not checked if they will yet) I think they might offer a better finish on the paint and decals, but in terms of the shape, I think it's a top quality model.
Score: 8/10

Welcome to my GP4 blog

Hello and welcome to my blog. I'm Kev (aka fongu, a moniker I've had for nearly 20 years) and I've loved making cars for GP4 ...